Bertone Dianchè BSS GT: watch out for him, Tesla Roadster!

What you can see in the images in this article are two supercars called Bertone Dianchè BSS GT Cube and Bertone Dianchè BSS GT One . But no, its name does not come from the Bertone design house, famous for its works for Ferrari or Lamborghini. Actually it is a new and mysterious company, which aims to succeed in the world of sports. But not in any way, but with 100% electric cars.

Dianchè's parent company, Flymove, has recently purchased the license to use the legendary name of Bertone at AKKA Technologies . With that the first two words of the name are explained. As for the acronym BSS, they refer to the battery exchange system developed by the company.

Ha Tesla is not worth it, but perhaps Dianchè ...

It is a practically identical system to the exchange of batteries that Tesla was playing a few years ago. Instead of being based on fast charging stations, this technology simply requires battery stations prepared to exchange the energy cells of a vehicle for fully charged ones. Tesla rejected this option because it did not find a way to make it viable. Anyway, that does not mean that Flymove can not do it on its own.

The performance of the Bertone Dianchè

At the end of last year, Dianchè already announced the prototypes of its two electric supercars in an exclusive event in Milan (Italy). Now we know the official specifications of both cars. In the case of the BSS GT One , which is the most basic, it has an electric motor on each axle with which it achieves a combined power of 400 HP.

On the other hand, the BSS GT Cube is much more radical. The final power that delivers is 800 HP, so it gets a decent performance of the same Tesla Roadster or Aspark's Owl that stood up in 2017. Flymove responsible say that its engines and aerodynamics allow you to accelerate from 0 to 100 km/h in only 2.2 seconds and to reach the maximum speed 350 km/h. The company says that it will only build nine units of each version and deliveries will start at the beginning of 2020. So unfortunately it will not be among the electric cars arriving in 2019.

Do not miss the article The secrets of the Tesla Roadster sent to space by SpaceX. There has not been a sports car that has already reached such speed. 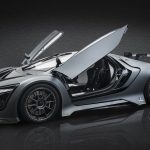